We have put forth a lot of effort letting people in the Dallas/Fort Worth Metroplex know they have a place to turn to when they’ve been in a car or truck wreck. Our uniquely qualified spokesperson, Darren Woodson, sincerely wants to encourage everyone to at least get checked out as soon as possible before minor injuries turn into major sources of pain.

Darren is a former American football safety in the National Football League. He played his entire career for the Dallas Cowboys from 1992 to 2004. Coach Bill Parcells said of Darren “[Woodson is] the kind of guy that makes this profession something you like to engage in. What he did in playing and his approach to the game – He’s the epitome of a professional.” Since his retirement Darren has worked as a football analyst for ESPN, appearing on programs such as NFL Live and SportsCenter.

These are some examples of the spots we’ve put together to help you know what to do if you’ve been in a wreck.

Click here to hear from real patients talking about their experiences at Accident & Injury Chiropractic.

Do something about your pain and injury...

*No money down on qualified claims 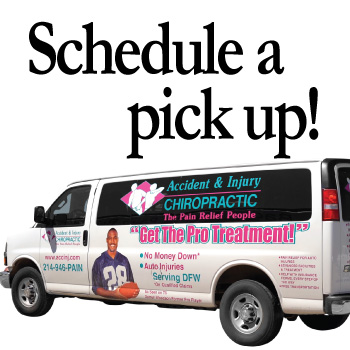 We make getting your accident injury treatment as easy as possible by offering free transportation to and from our clinics during normal business hours. Normally we’ll pick you up within 30 minutes of your call.

I loved how the staff takes time to listen and hear my concerns.
Very positive atmosphere from staff and location.
-J.S.M.