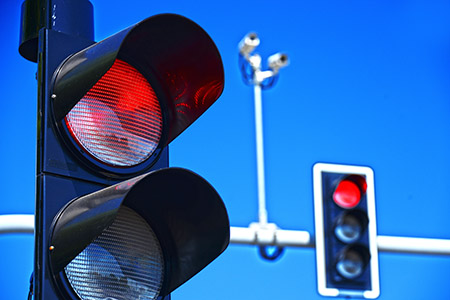 Red light cameras are automated cameras mounted on traffic lights that activate when a vehicle enters an intersection after the light has turned red. The camera snaps a picture of the license plate of the offending vehicle, and the owner is sent a ticket or notice of violation requesting identifying information so that a ticket may be issued. More than 75 countries around the world have operational red-light cameras. These cameras are meant to deter drivers from running red lights and thus reduce one of the major causes of intersection traffic accidents and accident injuries. But red-light cameras have not worked out as advocates had hoped, and a number of states—including Texas—have now banned their use.

The first problem with red light cameras has been their oversensitivity. Over the years, people have complained that the cameras pop into action too quickly, taking pictures of license plates on cars that edge into the crossing while waiting to turn. Some drivers have found the cameras are set off even if a car slightly strays over the line marking the intersection. Research has shown that tickets have gone to motorists who just barely ran lights.

In addition, some motorists have received tickets when they weren’t even the ones driving their cars. In one case, a husband and wife both received tickets because both their names were on their vehicle’s registration. In another case, the registered owner of a trailer was ticketed even though the trailer was being hauled by a truck driven by someone else.

But research has revealed something even more concerning. Case Western Reserve University conducted a study of 12 years of data from Houston and concluded that the cameras changed the composition of accidents but did not reduce them. Though red-light cameras may decrease the risk of one of the most dangerous kinds of accidents—T-bone, or right angle, car crashes—they may actually cause accidents when drivers slam on their brakes to avoid getting a ticket.

Many opponents of red-light cameras have argued that their main purpose is to provide extra revenue for cities rather than improving public safety. According to the Texas Comptroller, red-light cameras generated more than $706 million statewide since 2007. Half of the money went to funding trauma care across the state, and the other half was split between cities (to pay for things like traffic safety improvements) and red-light camera operators. Because these cameras are overseen by private companies that share the revenues from the tickets they generate, there is incentive to place cameras in areas that have potential to generate the most revenue rather than areas with the highest incidents of traffic accidents.

Fortunately, Governor Greg Abbot signed a bill on June 1, 2019 that prohibits cities from operating photographic traffic camera systems that catch citizens speeding or running red light and issuing them fines. But most states in the US still use red-light cameras, so drivers need to be cautious when traveling outside of the state of Texas—which many of us do over the holidays. Don’t edge over intersection lines while waiting to make a right turn. Don’t roll through a right turn when the traffic light turns yellow. If it turns red during your turn, you could receive a citation for running a red light. And, most importantly, never slam on your brakes to keep from getting a ticket at an intersection. You could end up in a rear-end collision. Here at Accident & Injury Chiropractic, we want you to stay safe on the roads, avoid automobile accidents and have a happy and healthy holiday season.