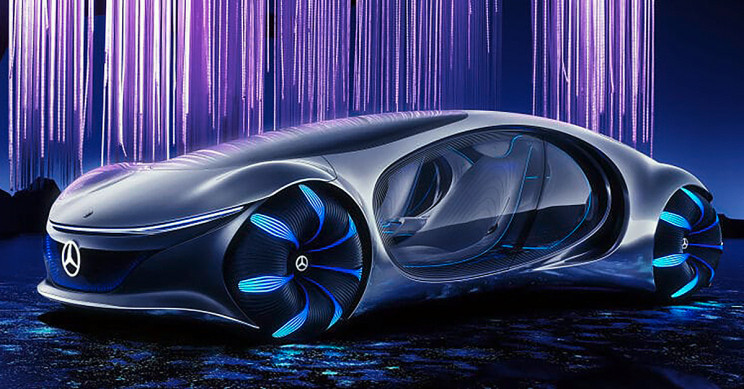 CES is an annual trade show organized by the Consumer Technology Association that hosts presentations of new products and technologies in the consumer electronics industry. CES 2020 showcased some remarkable innovations in technology that could impact car designs in both the near and distant future. These innovations will make driving more luxurious and, more importantly, safer. Here are a few of them that we hope to see in cars soon.

The most impressive thing on display at CES 2020 was Mercedes-Benz Vision AVTR, an Avatar-inspired show car. This concept car has to be seen to be believed. (To do so, go to https://www.theverge.com/2020/1/7/21054573/mercedes-benz-avtr-avatar-vision-concept-car-photos-daimler-ces-2020.) It detects your pulse and breathing, and instead of a steering wheel, it uses a multifunctional control element activated by your palm. This car is not slated for production in the near future, but the idea of using the biometrics it employs is gaining traction among car manufacturers. Before fully autonomous cars become a reality, cars will use biometrics to monitor drivers more and more to be sure they’re paying attention while driving and optimizing safety systems in the event of a crash. In addition, cars of the future will monitor passengers so they can present them with tailored infotainment experiences.

Lidar, which stands for Light Detection and Ranging, is a key component to self-driving cars. It uses laser pulses to build a 3D model of the environment around the car. The biggest problem with lidar technology is its prohibitive cost. At CES 2020, Velodyne introduced its Velabit lidar sensor. It’s tiny—the size of a deck of cards—and the price is just $100 per sensor. The previous models cost as much as $75,000. The goal is to get the cost of the sensor down to a point that it can be used in all cars, not just high-end models, getting us closer to hands-off, self-driving cars in all our driveways.

Sony made quite a splash as well at CES 2020 with the unveiling of their fully electric concept sedan, the Vision-S. This show car features 33 different sensors inside and out, multiple widescreen displays, 360-audio, and always-on connectivity. Production of this car is not in the works yet, but the newly designed EV platform that powers the car will be available to power other vehicle types for car manufacturers soon.

Lightyear unveiled its first prototype of the Lightyear One, an electric car with approximately 6 square yards of solar panels on its roof and hood that is slated to be available for purchase in 2021. Lightyear claims its solar panels are 20% more efficient than traditional models and can charge the car’s battery with up to 7 miles of range an hour giving the car 80 more miles of overall range than Tesla’s Model S. With continued cost-reductions in development and improvements in efficiency, solar power is likely to become more common in cars of all types in the future—not necessarily as their only power source, but as a supplementary one to help drive the power-sapping sensors employed by increasing levels of automation.

According to the National Highway Traffic Safety Administration, thousands of accidents are caused each year when drivers are temporarily blinded by sun glare. Now Bosch is redesigning the sun visor, which has not changed in almost 100 years. Bosch’s Virtual Visor offers up to 90% more visibility than traditionally designed sun visors. It employs a transparent LCD screen and an in-car RGB camera that can track the sun shining on a driver’s face and darken specific sections of the visor to prevent glare. That way, only the part of the visor where the sun is hindering a driver’s visibility is blocked out. The Virtual Visor may be available on a variety of cars in the not-too-distant future.

BMW’s ZeroG lounger seat can recline either 40 or 60 degrees. If a driver maneuvering a car while reclined that much makes you nervous, fear not. When the seat is reclined, a screen drops down from the headliner that shows directional information, and there’s a cocoon-style airbag that deploys if there’s a crash. The seat is super comfy and is designed to prevent motion sickness. These seats will be in production in the next few years.

Continental and Sennheiser have developed a sound system that can emit sound by vibrating internal components in various surfaces inside the car including the dashboard, door panels, and headliner. This creates an immense surround-sound experience and helps reduce a vehicle’s overall weight.

Lamborghini and Rivian are using Alexa tech in a new way—to control vehicle functions like adjusting cabin temperature, playing music, and getting directions. This is in addition to making calls and linking to connected smart home devices.

The Byton M-Byte electric SUV debuted in production form last year. Now ViacomCBS, Accuweather, Aiqudo, and other companies are planning to add their entertainment content and services to the car, which has a massive 48-inch screen. This screen, of course, is not meant to be viewed by the driver while on the road.

Visa and SiriusXM have partnered for the development of tech for in-dash ordering and automated payment for things like food, gas, tolls, and parking using either your car’s infotainment display or voice commands. While current systems like this for ordering and payment may require interaction directly with your phone, this system does not. Instead, your car must have 4G-LTE data connection and SiriusXM connected services, as many do. The two companies are working to sign up participating vendors and services en masse to ensure that the places you shop and toll roads you use are ready to accept your mobile payment. Though the service may be a few years away, major metropolitan areas will be the fastest to get it, and that’s good news for the D/FW metroplex.

We have much to be excited about as we look forward to driving in the future. In the meantime, stay safe on the roads!